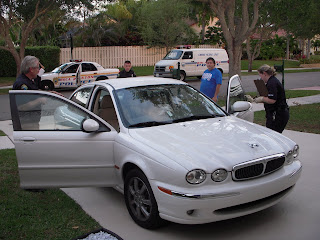 This is a true story....
It was 7 AM and I looked out my bathroom window. I saw a police van and three police cars. My first thought was my son. Was he home in bed, safe and sound? Then I wondered if someone was hurt.... or did I do something wrong?
The doorbell rang. I sent my husband and stayed back, fearful of what I might hear. "Crime," I heard the officer say through the cracked bathroom window where I stowed myself safely. "There was a crime in the neighborhood," he went on to say.
Then the words muffled as husband and the police officers moved toward the street.
"Yes," I heard my husband say. "That is my wife's car." I was dressed by then and walked outside as if on cue .
"Mrs. Sterling, we need to ask you a few questions. OK?" "Of course," I replied.
Do you smoke crack, they asked me. Of course, I don't and they asked me to look into the car seat and to report what I saw. I noticed my car was ransacked and there were glasses on the drivers seat and a long glass rod (aka - Crack Pipe) I confirmed it did not belong to me.
The police notified me that a man was apprehended in my car smoking crack and looking for valuables in the middle of the night. He was in custody and he would be charged as such. I was asked for permission to dust for fingerprints. I agreed.
After the police left, I took my car to be cleaned. I noticed a box I received a year ago from a friend; I had shoved it into the glove compartment. I didn't even know it was there until I held the empty box in hand. It once contained a beautiful kaleidoscope that was handmade in New England. I have a vague memory of it. Never even used it. Never took it into my home. Discarded it and now, I hold an empty box in hand feeling I lost something I didn't even know I had. Funny thing, huh?
Here's the not so funny part.... I had images of the man in my car. All day long I imagined his look, smell, lifestyle, cadence of his voice. I imagined him sitting in my car and it turned out, I relied on all the stereotypes that have conditioned my consciousness. The man who entered my car, ransacked it, smoked crack and left his pipe behind was a 47 year old white Jewish man who has clearly lost his way in life.
I may have lost my kaleidoscope that I didn't even know I had, but what I gained is much more important. I gained compassion for someone who is suffering, acceptance that I let my imagination influence my perception and appreciation that sometime or another, we all lose our way. May Robert, the man who entered my car, find his way. And let us all pray.
Posted by Liz Sterling at 9:21 PM